March saw us roll into autumn with quite high temperatures early on that became milder as we drew closer to April. 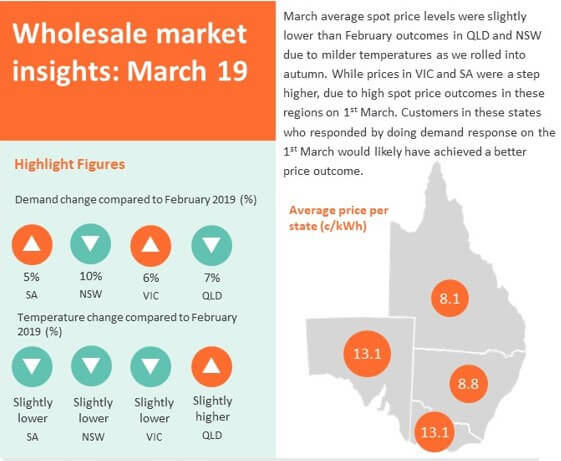 Generation output from black coal generators in Queensland and NSW increased by 7% during March and (along with lower average demand) contributed to a decrease in spot prices in northern regions. Average inter-connector exports from Queensland to NSW (via QNI) increased from 293MW in February to 493MW in March, providing further downward pressure on NSW spot price levels.

The output from brown-coal generators in Victoria and gas-fired generators in South Australia increased thermal generation in southern regions, though the stronger demand levels in these regions and the continuation of high exports to Tasmania (via Basslink) resulted in spot price outcomes remaining robust in these regions. The increased availability of brown-coal generating units in Victoria saw their output increase by 14% on February’s level. A 13% increase in generation at Pelican Point, Torrens Island, and Osborne gas-fired power stations in South Australia offset a reduction in wind generator output over the month. The increased inter-connector flow across Basslink, from 206MW in February to 272MW in March was due to continued conservation of long-term water storages by Hydro Tasmania and reliance on mainland generating capacity.

It is interesting to note that while average monthly inter-connector flow between Victoria and South Australia was relatively neutral during March, increased generation from rooftop solar PV and utility-scale wind and solar is resulting in strong exports to Victoria during the middle of the day, while Victoria is exporting similar energy volumes to South Australia across overnight periods. The NSW-Victoria inter-connector exhibits a similar trend, with energy flowing south into Victoria during peak periods, and north into NSW during off-peak periods. Black coal generator output in Queensland and NSW is contributing to the periods of high southerly flow, with brown-coal generators in Victoria sending energy north during off-peak periods when spot prices tend to be lower.

Generation from Snowy Hydro decreased increased slightly from 147 GWh in February to 155GWh in March though output continues to be constrained due to low water storage levels at Lake Eucumbene. Water in storage is currently at around 26% of capacity, though Snowy has managed to contain further decreases despite low rainfall and inflows. Storage levels at Eucumbene are not expected to increase markedly until the second half of the year following winter rains and the melting of snow cover in early spring.

Milder autumn temperatures and reduced demand across all NEM regions will be counteracted by planned outages during April and is likely to result in spot price levels remaining at the elevated levels observed over the past six months. With warmer than average temperatures forecast by the BoM for all NEM regions for the months ahead (and lower maximum and average daily demand), there is potential for a slight softening of average spot prices, however, the bidding behavior of thermal generating plant across the NEM is continuing to support price outcomes.

Autumn is generally a subdued demand and spot price period across the NEM which results in significant coal-fired capacity coming off-line to undertake planned outages following the summer period. This year up to 3,500MW of coal-fired capacity across NSW and Victoria will come offline for maintenance during April. With the lower available capacity coinciding with modest maximum and average demand levels, spot price impacts will be reduced. Queensland black-coal generators are expected to maintain strong output and exports of electricity to southern regions over coming months, offsetting the effect of the coal-fired generator outages in NSW and Victoria.
Though coal-fired generator performance across NSW and Victoria improved over March, with multiple units undertaking planned outages over coming weeks the performance of remaining units will be important in determining spot price outcomes during April. Further forced outages and unit trips would result in higher average spot prices, though extreme spot price events are not expected due to the availability of gas and hydro peaking plant.

The BoM’s latest climate outlook continues to predict higher than average daily maximum and minimum overnight temperatures during autumn. This is likely to have a modest impact on demand levels in NSW and Queensland, though milder autumn in Victoria and South Australia would result in reduced maximum and average daily demand levels and a potential easing in spot prices, particularly if these periods coincide with the high renewable output. Hydro Tasmania has reduced hydro output to conserve water over recent months due to declining storage levels. This has resulted in Tasmania being a large importer of energy from mainland regions (up to 475MW at times) and provide support to spot price levels. This operating behavior is expected to continue until winter rainfall begins to replenish Tasmanian dam levels.

Additional renewable generation from new large scale solar and wind in the NEM continue to enter the market, though this increased supply is not leading to lower underlying spot price outcomes due to the influence of higher priced gas, hydro, and black-coal generation in setting the marginal spot price. Black-coal generators have generally supported minimum spot prices during off-peak periods at around $60/MWh. Black-coal, gas, and hydro generators have priced capacity in the $90-$120/MWh range during peak periods. We expect hydro and gas-fired peaking plants to contain prices below $300/MWh across all regions over the coming month due to lower maximum demand peaks.

In summary, spot price outcomes in April are expected to decline slightly from February and March levels due to milder temperatures and demand, though outcomes will be influenced by the availability of coal-fired generation in NSW and Victoria. We expect Victorian and South Australian daily average prices to remain in a band between $70-$100/MWh, with NSW and Queensland spot prices slightly lower in the $70-$90/MWh range (given the higher level of reserve generating capacity in Queensland exporting energy south into NSW). Underlying spot prices are expected to remain elevated, through periods of a high renewable generation or low demand may result in instances of low spot prices overnight or on weekends, though this is unlikely to materially reduce monthly average prices.