Here’s a story about one of our large warehousing customers with seven sites around Adelaide. They started buying wholesale power last year and have seen great savings on their bills.

The rising power prices in South Australia have meant that businesses are looking for new ways to keep their costs under control.

One of our large warehousing customers – let’s call them Sam’s Warehouses – employees nearly 600 people across their sites, which are moving inventory in and out around the clock. They also have cool stores that need to keep produce at just the right temperature.

The group’s Procurement Manager saw the rising power bills and started looking at alternatives to standard fixed rate contracts in 2017. That’s when they found Flow Power.

Sam’s Warehouses signed onto Flow Power’s Freedom Power Plan. We looked at when he was using the most power – turns out it was mainly outside the peak pricing times, which meant that the group had a great Price Efficiency Factor.

They understood that their fixed rates had always been based on the movements in the wholesale market and that buying wholesale power with Flow Power would give them greater transparency into the real price of electricity.

We wanted to reduce power costs and better understand what we were paying, said the Procurement Manager”.

The graph shows the difference in what the business paid for electricity on wholesale compared to the average fixed rate equivalent according to ASX futures. 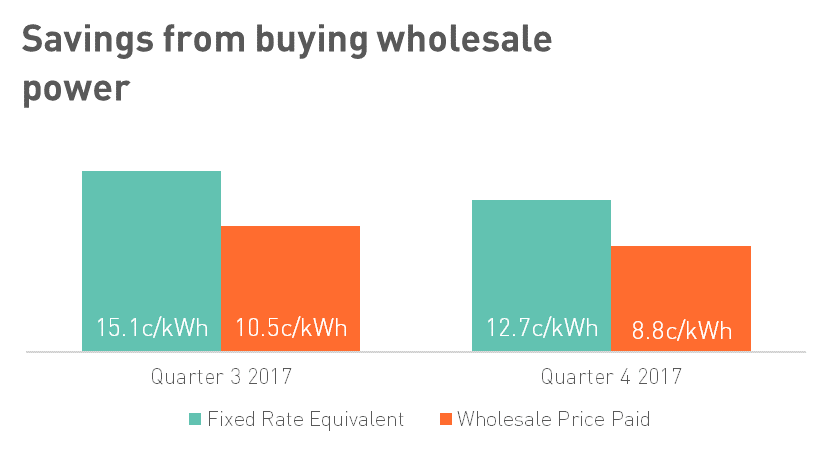 Sam’s Warehouses saved more than 30% on their energy costs with no changes in operations.

Next steps for the business is getting involved into AEMO demand response programs, looking at investing in an offsite PPA and so much more.

Powering ANCA with a Wind PPA